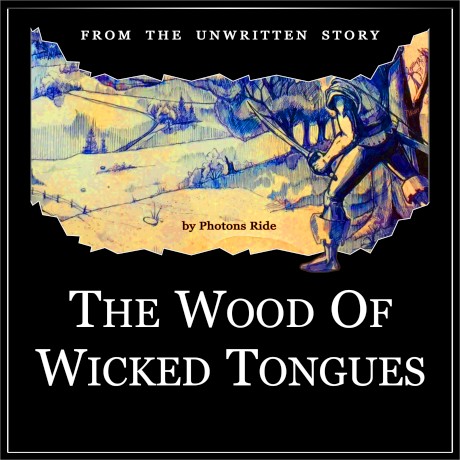 The Wood of Wicked Tongues is a story involving friends who; disregarding an ancient warning, pursue a peculiar treasure concentrated in the most vicious woods on earth.

In this soundtrack you hear one playful scene in the story. The setting entails several friends playing a board game. During the game one friend suggests that they could make a profit in real life by an expedition to get TWoWT. In this soundtrack you hear another friend recite the ancient warning as he prances around the room in semi-serious opposition to the treasure-seeking proposal. The playfullness of this scene can be easily missed in its audio-only form, but it's quite frolicsome. A screenplay has been drafted for video production.

There's a message for YOU here — consider the words carefully!

The Wood of Wicked Tongues soundtrack and the unwritten story from which it comes are family-friendly. You can contact the author via Photons Ride.

Preview or Buy
or Listen On:

About the Cover Art

The most significant aspect of the cover art was drawn during the course of multiple visits with a school friend — both of us seated at my mother's kitchen table. During each of these visits we would talk about life and all manner of things. As we talked, he would draw and drink coffee while I enjoyed his company and the continually expanding picture that he was drawing for me. The original picture is black and white and includes elements that are not seen in TWoWT cover art. The Wood of Wicked Tongues was not even a thought in our heads when the picture was being drawn. The friend's name is Jon Hartley whose paintings today are sold to people who commission his work.